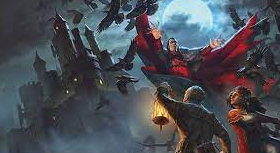 During these tumultuous times, D&D has experienced an exceptional resurgence in popularity, fuelled in no small part by our fervent desire for human interaction. Scripted campaigns for the game’s fifth edition have been published by Wizards of the Coast for years now. So that organizations can choose which campaigns to play. However, the books that follow them are very different. VAN RICHTEN’S GUIDE.

Wesley Schneider has also managed to cram a variety of new guidelines for character creation, a number of clever allies, 32 vicious new monsters, and all the mild training your team needs to run a spine-tingling campaign of your very own devising safely. I can’t wait to see what followers do with Van Richten’s Guide, which is by far the most feature-rich D&D ebook this generation.

To begin, let’s look at some background: The Ravenloft journey was first posted in 1983. Strahd von Zarovich, the protagonist of that slim, 32-page adventure, is a charismatic vampire. Modules derived from it spawned a series of horror-themed adventures that were loosely linked by a semi-sentient mist and a fantastical cosmology. In Van Richten’s Guide, some of these settings are reinvented as well as new ones provided along the way.

On one hand, we have feudal Borca. Where the populace is trapped and harried by not just one but two fiendish villains. It consists of four areas: the Carnival, a misty area populated by wild performers and an imposing sword; darkon, an exploding fort whose disparate rooms desperately try to reassemble in midair; and a haunted train, itself a fascinating scene, passing through them all.

In this ebook, each setting is the beginning of a multiyear campaign. They need only make their own characters to get started. And Van Richten’s Guide has a wide array of new equipment to help them on their way.

These sorts of damning in-game penalties are accompanied by endless discussions about consent. The Van Richten’s Guide includes a whole chapter on the idea and entirely integrates equipment like the X-Card into modern-day D&D. Even including the creator John Stavropoulos among its authors. Its own mantra is: Horror role-playing is about scaring the characters. No longer the players, and all precautions should be taken to ensure that stays the case throughout.

There is, however, one aspect this time around that is absent from regular D&D ebooks. No stat block appears for any of the book’s marquee villains. Van Richten’s Guide did not include Strahd, whose stats already exist in Curse of Strahd. Domain’s villain doesn’t always have to be a huge terrible ready to fight, as mentioned early in the book.

The D&D game is more than just combat, and this omission will direct players towards more challenging role-playing and world-building, and relieve them from the anxiety of trying to maximize their stats and magical powers to win.